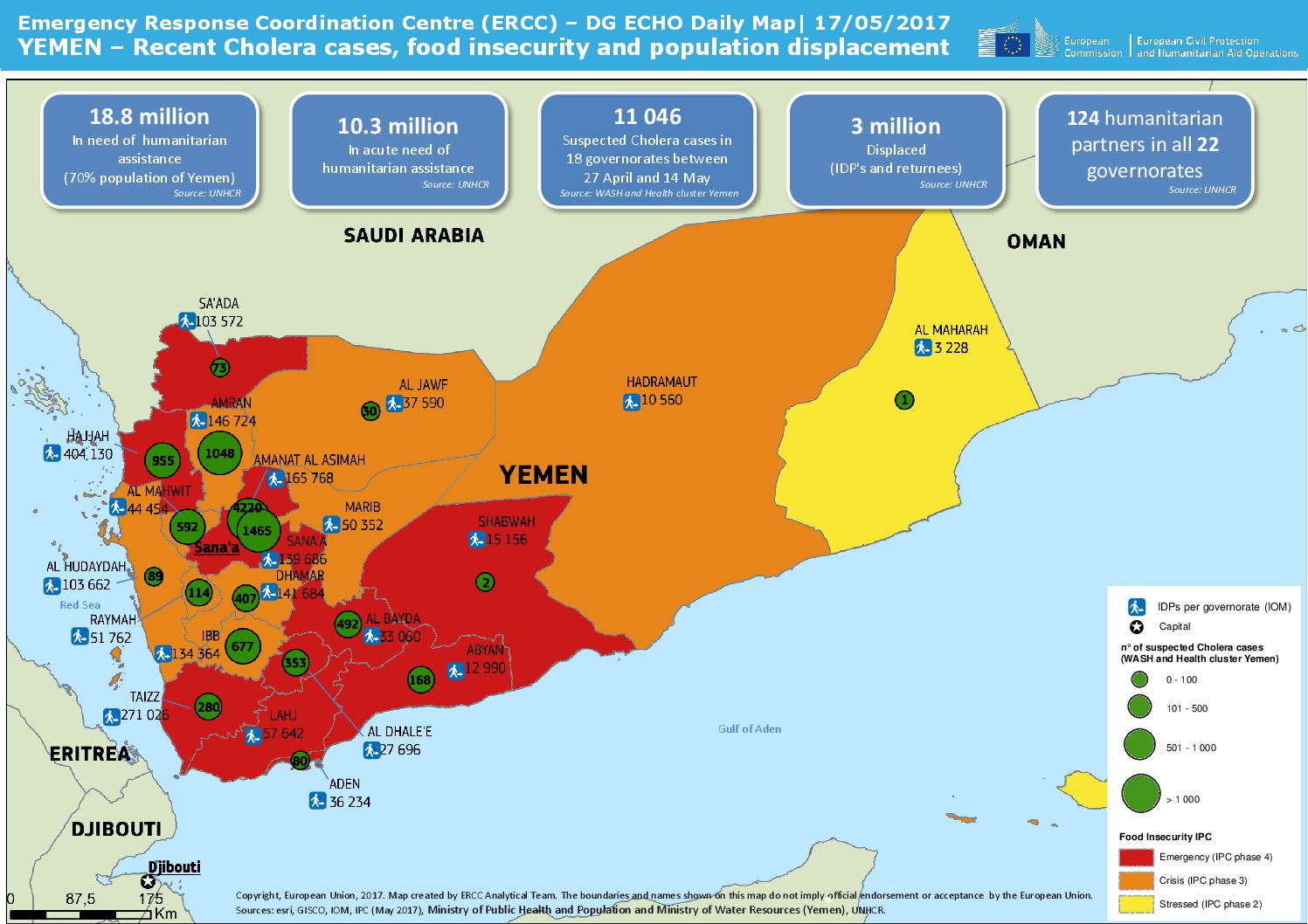 The death toll continues to rise in Yemen, where a cholera outbreak has been spreading for months, according to the WHO. There have been 275 987 suspected cholera cases and 1634 deaths from the illness between 27 Apr and 5 Jul 2017, the WHO said in a statement on Wed 5 Jul 2017.

“If you get caught early in the morning with this and you don’t get treated by the end of the day, then you really have a problem,” WHO spokesman Christian Lindmeier said. “A weak elderly person could really be dead by the end of the day.” The WHO said in a statement last week, “we are now facing the worst cholera outbreak in the world.”

The following countries have areas with cholera. However, it’s important to remember that most cholera is spread in limited outbreaks, and travelers are rarely at risk.

What is the cause of Cholera?

Cholera is caused by ingestion of _Vibrio cholera_ bacteria, which are spread through water or food that is contaminated with faeces. Up to 80 percent of people with cholera don’t have symptoms, but they are still capable of spreading it. Those who do show symptoms have a sudden onset of watery diarrhoea, which can lead to death by severe dehydration. About 14.5 million people in Yemen don’t have access to clean water and sanitation, according to the WHO. All but 2 of the nation’s governorates have been hit by the outbreak.

The WHO has partnered with the United Nations Children’s Fund and local health authorities to deliver medication and aid to combat the ongoing outbreak, including the establishment of 45 diarrhoea treatment centers and 236 oral rehydration therapy corners. Lindmeier said it is essential for people who are infected to rehydrate immediately. “The biggest challenge is reaching people,” he said. “This is great. This is a major effort and a huge logistical effort, but people need to know that they can get there. People need to know that they can find these places.”

Efforts have been complicated by Yemen’s civil war, which has left more than 18.8 million people in need of humanitarian assistance, according to the WHO. Many of the country’s trained medical personnel have fled or been killed as the conflict intensified over the past 2 years, said Juliette Touma, UNICEF’s regional chief of communications for the Middle East and North Africa.

Touma travelled to Yemen in early June 2017 to see what work was being done and said she was impressed by the dedication of health workers however, she couldn’t help but think about all the people who still needed relief. “What I kept thinking about was all of these children who couldn’t actually make it to medical care because they live in the remote parts of Yemen and the rural areas where there are no facilities, or those who couldn’t afford to pay,” Touma said.

How to prevent Cholera?

Since the outbreak began, campaigns and community volunteers across the country have been trying to spread the message of how to prevent cholera, she said, including how to clean water, to wash food before eating it and to take general hygienic measures. But Touma said there is a lot more to be done. “As long as we have more reports and suspected cases of cholera, and as long as the number of suspected cases increases — and it has been increasing by the day — we can’t unfortunately say there has been progress,” Touma said. “There is a cure for cholera, we can cure it, and that is very much dependent on getting in essential supplies, but we need to get more. We need to get more dedicated personnel.”

The Advisory Committee on Immunization Practices (ACIP) recommends CVD 103-HgR vaccine for adult travelers (age 18–64 years) to an area of active cholera transmission. An area of active cholera transmission is defined as a province, state, or other administrative subdivision within a country with endemic or epidemic cholera caused by toxigenic V. cholerae O1 and includes areas with cholera activity within the last year that are prone to recurrence of cholera epidemics; it does not include areas where rare sporadic cases have been reported.

The risk for cholera is very low for people visiting areas with epidemic cholera when simple precautions are observed.

All people (visitors or residents) in areas where cholera is occurring or has occurred should observe the following recommendations:

How is Cholera treated?

Cholera can be simply and successfully treated by immediate replacement of the fluid and salts lost through diarrhea. Patients can be treated with oral rehydration solution, a prepackaged mixture of sugar and salts to be mixed with water and drunk in large amounts. This solution is used throughout the world to treat diarrhea. Severe cases also require intravenous fluid replacement. With prompt rehydration, fewer than 1% of cholera patients die.

Antibiotics shorten the course and diminish the severity of the illness, but they are not as important as receiving rehydration. Persons who develop severe diarrhea and vomiting in countries where cholera occurs should seek medical attention promptly.

If ORS is unavailable give the child a drink made with 6 level teaspoons of sugar and 1/2 level teaspoon of salt dissolved in 1 litre of clean water.

Be very careful to mix the correct amounts. Too much sugar can make the diarrhoea worse. Too much salt can be extremely harmful to the child.

Making the mixture a little too diluted (with more than 1 litre of clean water) is not harmful.

Encourage the child to drink as much as possible.

A child aged 2 years or older needs at least 1/2 to 1 whole large (250-millilitre) cup of the ORS drink after each watery stool.

How much ORS should be given?